Chapel Cars and the Pullman Company

Through the good graces of the Lake Forest College Library, the Pullman State Historic Site has copies of a number of photographs of 3 chapel cars that were manufactured or converted by the Pullman Company. The Chapel Car movement was an interesting religious and cultural movement that lasted roughly from the 1890s to the end of World War I.

The Cathedral Car of North Dakota

The first of these cars, and the most famous, was built by the Pullman Company in 1890 for the newly appointed Episcopalian bishop of North Dakota, called the Cathedral Car of North Dakota.

The Cathedral Car of North Dakota
The Right Reverend William Walker realized the enormity of his task, creating sustainable dioceses in the sparsely settled Dakota territories. He hit upon the idea of creating a chapel car that could visit around the diocese, conduct services, and generally perform all of the functions of a parish church. In 1889, Walker approached a number of people on the east coast for contributions. One of the largest contributions was given by Cornelius Vanderbilt. Raising funds for the Chapel Car soon became a nationwide cause in Episcopal dioceses, with funds raised at churches by bake sales, parish contributions, and donations. Walker soon had enough money, and commissioned the Pullman Company to build his car. The car was duly built, at a cost of $3,000, and began operations in November of 1890. As reported in the New York Times, November 13, 1890,
The cathedral car of North Dakota, in which Bishop W. D. Walker intends to visit every village and hamlet in his extensive diocese, stood on the Baltimore and Ohio tracks all day to-day... The car, with Bishop Walker aboard, will leave to-morrow for Fargo, to enter on the work for which it was constructed. The car, 60 feet long, was divided into two parts: a large main section, which acted as the chapel, and a small area where the Bishop lived and maintained his offices. The car, which featured an unusual gothic arched roof, was designed by noted church architect Charles Haight. There were no pews in the car. 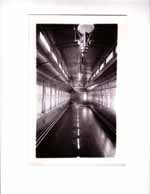 Cathedral Car interior
Instead, chairs were used. A small pump organ was installed at the front of the facility. The Bishop would contact the railroad line in the area (railroads would pull the car free of charge), advertise his upcoming presence, arrange to have the car transported to a siding near a station, and conduct services. 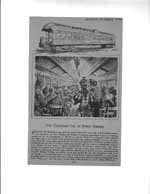 Services were very popular
Railroad Magazine, 1938
The car proved very popular, frequently having overflow crowds and multiple services. The car was last used in 1899 by Bishop Edsell, Walker's successor, being more or less permanently stationed in Carrington, ND after traveling 70,000 miles throughout North Dakota. The car was eventually sold in the fall of 1901 for $1,000. The baptismal font and lectern were last seen in St. Mary's Church in Guelph, ND, in 1919.

Francis C. Kelley, president of the Catholic Extension Society, also viewed chapel cars as good way of spreading the Word. The Society acquired a wooden 1886 Wagner car which was refurbished by the Pullman Company and christened the St. Anthony.

Another view
The car operated in Oregon from 1907 to 1919. It is credited with creating 43 congregations in the Archdiocese of Portland and 41 in the Diocese of Baker. All told, the Society operated 3 cars, St. Anthony, St. Peter, and St. Paul. The last of these, the St. Paul was an all-steel 86 foot car, donated by Dayton timber magnate Peter Kuntz. It was built at the Pullman Factory in early 1915, and operated in Louisiana and parts of Texas, North Carolina, and Oklahoma. It was in operation from 1915 to 1918.

A number of chapel cars operated in the U.S., including 7 operated by the American Baptist Publication Society, which were endowed by Nelson Rockefeller. The golden age of these cars came to end in 1918. U.S. American Railway Association (ARA) regulations prohibited operating wooden cars (too dangerous) on mainline railroads after 1910. U.S. ICC regulations barred the railroads from transporting the cars for free. And, of course, the national war footing caused by World War I dictated that all the tracks had to be kept clear for troop trains and war materials. If you would like to learn more about the chapel car movement, there are 2 books published about the subject: