The exterior of the Greenstone Church is of serpentine limestone quarried in Pennsylvania. The sanctuary is unchanged with the exception of the chancel arrangements. All of the cherry wood is original. Pullman intended that the building be rented to the various denominations on a shared basis under one pastor. The idea did not succeed. The rent of $300 per month for the church and $65 for the parsonage to the south were deemed excessive. The original cost of the building was $57,000. It will seat 600.

The building was consecrated in 1881 by The Rev. Dr. James Pullman (a brother) from the Universalist Church of Our Savior in New York. The building stood empty for some time because the various religions could not agree to share its facilities. The Presbyterian congregation eventually worshipped there until the property was sold to the Methodists in 1906.

Children playing in front of the Greenstone Church, ca. 1890

It is somewhat ironic that the Methodists came to own the building, for it was the Methodist minister, John Carwardin, who emerged in 1894 as one of the front line advocates of the workers' cause in the Pullman strike. It was his data collection and writings that provided documentation for the legal consideration that led to the State Supreme Court ruling in 1896 that ordered the Pullman Company to divest itself of the all property not related to its state manufacturing charter. The pipe organ, built in 1882 by the Steere and Turner Company of Springfield, Mass., (one of the finest organ builders of the nineteenth century) is one of the few manual tracker action organs still remaining in the United States. It was originally powered by hand-operated bellows, later by a water powered motor, and now by an electric blower. This was the only modernization of the instrument. That the organ is largely in its original condition and has had relatively little repair over the past hundred years shows the high quality of the materials and workmanship.

Interior of church, clearly showing the organ, ca. 1892
Page from the City of Brick

A tracker action organ is one in which the valves that supply air to the individual wind chests and pipes are linked to the stops and keys respectively and are directly activated by the organist's hands or feet. Organists unused to this find playing the Greenstone organ physically demanding. The west Rose window has been restored with funds raised by the community. Most of the glass is original. The window was designed by Beman. Beman was later commissioned to create designs for the Swedish Elim Lutheran Church and Holy Rosary Church -- these two buildings are still standing on 113th St. west of the elevated Metra Electric tracks.

Images of the Greenstone Church 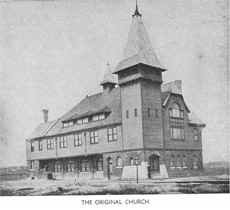 The Elim Lutheran Church was organized on December 2, 1885, as a member of the Augustana Synod, to meet the need of Swedish residents working at the Pullman Palace Car Works in and around the village of High Prairie. The name "The Svenska Evangelsik Lutherska Elims Församlingen" was chosen. It was incorporated on March 17, 1886