Planning the Town of Pullman 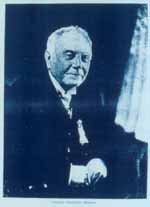 Nathan Barrett
Nathan Franklin Barrett was born on Staten Island, New York, the son of a prominent businessman. After turns as a sailor, then a soldier in the Civil War, Barrett began work at a nursery his father had established. Largely self-taught, his earliest landscape design work included station grounds for the New Jersey Central Railroad. In the 1870's, George Pullman retained Barrett to "study his oceanfront property at Elberon." Soon thereafter, in collaboration with Solon Spencer Beman, Barrett began to design the model town of Pullman. Beman designed the buildings, and Barrett was responsible for siting them and designing the landscapes. Barrett remained close friends with Pullman until Pullman's death in 1897. Barrett's design of the Pullman community led to his involvement in other towns and suburban residential developments, including Chevy Chase, MD; Fort Worth, TX, and Birmingham, AL. In addition to his planning achievements, Barrett designed landscapes for many country places of prominent industrialists and businessmen. Many of Barrett's design elements for Naumkeag, the home of Joseph H. Choate in Stockbridge, MA, remain intact to this day. In 1895, Barrett was appointed landscape architect of the Essex County (New Jersey) Park Commission, where he designed parks and the layout of boulevards connecting them. He served as a commissioner of the Palisades Inter-State Parkway (located in New Jersey and New York) from 1900 to 1915. Most notably, in 1903, he was elected president of the American Society of Landscape Architects, having been one of the driving forces in its initial formation. Barrett is buried in Oakwoods Cemetery SW of Hyde Park. 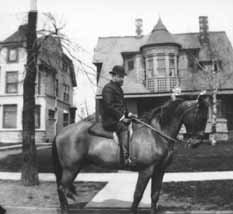 Solon Beman
Beman was the son of an architecture "buff" with a large library on the subject. At the age of 14 he apprenticed with Richard Upjohn, and remained with him for eleven years. At the age of twenty-six he designed a home for George Pullman in New Jersey and was commissioned to redesign Pullman?s Prairie Avenue home. Impressed with his work, Pullman asked Beman to design the town of Pullman.
Famed architect Louis Sullivan wrote: "I doubt if any architect in the country could have produced work superior to that of Mr. Beman, it was a huge undertaking for so young a man." Beman did not proclaim any architectural theory like Sullivan, and this, coupled with that so many of his buildings have been demolished, accounts for his relative obscurity. His architectural career is closely linked to the transportation industry. Other notable buildings by Beman in Chicago are the Fine Arts Building on Michigan Avenue, and the Dearborn Station at the foot of Dearborn in the loop that has been recycled into more contemporary use. He designed the Rosalie Villas on 57th and 58th Streets at Harper Avenue in Hyde Park, and the Kimball House at 18th and Prairie across the street from where the Pullman Mansion stood..
Beman rarely discussed his work, and when he did, he did it laconically. At the opening of one of his buildings in Terre Haute, Indiana, he quoted an architect in Charles Dickens's Martin Chuzzlewit: "My friends... my duty is to build, not speak; to act, not to talk; to deal with marble, stone and brick, not language."