The 1,000 seat theater in the Arcade was dedicated on Jan. 9, 1883, to great pomp and ceremony. The guests of honor, which included Pullman, John Crerar, and General P. H. Sheridan, arrived by special train, consisting of 6 brand new coaches. The guests were met by the Pullman band under an awning run out to the tracks for the occasion. As the Tribune reported at the time (Jan. 10, 1883): "Both ladies in gentlemen were in full dress, and the broad staircase, vestibule, and foyer, thronged with the gaily-dressed crowd, presented a festive appearance" After a brief speech by Pullman and a 20-minute opening address by General Stewart L. Woodford, the curtain rose at 8:30 p.m. to the play Esmerelda, performed by the Madison Square Company from New York. [26] Woodford would shortly assume the 3rd congressional seat in New York, and would become, in 1897-98, the "United States Envoy Extraordinary and Minister Plenipotentiary to Spain" (an unenviable position just ahead of the Spanish-American War). [27] The play Esmerada was certainly a popular play in its day and a crowd pleasing choice for an opening of a theater; the Cornell Daily Sun wrote that Esmeralda is a remarkable work. Surely no drama was ever more free from artifice and guile. (April 19, 1883, p. 3). The critic George Odell called it a "sweet, harmless play." It was adapted from a novelette by Francis Hodgson Burnett by Burnett and William Gillette. Burnett, of course, went onto write such works as Little Lord Flaunteroy and The Secret Garden. The plot consists of trials and eventual triumph of the love between the North Carolina farm girl Esmeralda and her neighbor, Dave Hardy. The play was the first major production for the actress Annie Russell. The Chicago Tribune wrote that Miss Annie Russell... [is] still quite young, very pretty, and graceful, and with proper training will be heard from. (April 24, 1883, p. 5)

Annie Russell, 1899
One of the actors also appearing was probably the famous actor John Edward Owens who starred in the Madison Square Company's production in 1882. The Chicago Tribune's depiction of that opening day described the elegance of the Theater. Its entrance was reached by "ascending a massive stairway" on the west side of the Arcade Building. The foyer and hallway ceiling of the theater entrance was painted sky blue with stars painted on it. A giant gas chandelier hung from the frescoed ceiling inside the theater, which had five elegantly decorated boxes on each side of the main seating area, extending from a balcony. Seats in the orchestra were covered in red leather, and the whole Theater was decorated in a Moroccan/Persian motif.

Composited image of the Arcade Theater.
Note that this image was created from Photoshop by melding together 2 Johnson photographs.
The Theater took a long time to open because of its elaborate design and appointments. The famous Hughson Hawley, scenic artist of Madison Square Theater in New York City painted the curtain and scenery, according to the Chicago Times, June 14, 1882, over an eleven week period. Hawley (1850-1936) was a British-born self-taught artist who moved to New York in 1879 and who was a professional delineator known for his incredibly detailed and realistic architectural drawings. Hawley also contributed to the decorations of the Arcade library. While working in Pullman, he lived at the Hotel Florence. 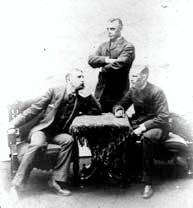 Hughson Hawley, Nathan Barrett, and Solon Beman pose for their official portrait.
The oriental decor, a combination of "Moorish, Arabic and Persian" (modified slightly) of the audience section of the theater was accompanied by equally ornate stage settings, including paintings of scenes the height and width of the entire stage. The stage curtain, although a flat surface, was a work of incredible perspective and was painted over a period of eleven weeks by Hawley. To ensure "absolute correctness" in all of the details, Hawley was loaned brocade fabric, oriental rugs, and other items by Marshall Field. During his sojourn in Pullman, Hawley lived in the Hotel Florence. Doty described it as: In this artistic work there is not the remotest hint of cars, railways and locomotives. The beholder easily realizes that something besides the mechanical holds sway here, and that for a time the hum, clatter and clang of machinery fades into silence, and even from memory, while the mind is busy with the pleasing environment of art. Although Doty may have been speaking of the decor, she also thought much of the various entertainments, provided about four times per month in 1893, and listed over two pages in the "The Town of Pullman." Evening shows included plays, choir concerts, minstrel shows, comic actors like Sol Smith Russell, singers like Nellie McHenry, and vaudevillians such as Ezra F. Kendall. Ticket prices ranged from .35 to .75 cents, apparently considerably less than the prices charged in Chicago theaters. The theater also served as a venue for concerts for library fundraising and programs often included advertising for local businesses. Although the company insisted it broke even on the theater, that may or may not have been the case; it was apparently policy to keep prices as low as possible.

The stage curtain can also be seen in a 1915 photo gracing the wall of the Palmer Park Field House, Pullman neg. P.18710, Chicago Historical Society.
The Theater played host to a number of productions and companies over the years. According to the Daily InterOcean, on June 7, 1883, Mr. Arthur Sullivan (of Gilbert and Sullivan) himself oversaw the production of his 1871 comedy On Guard. In Sept., 1888, Sisson and Brody's Little Nugget company opened. Oct. 21, 1888 saw the opening of Mattie Vickers and her company. And Sep. 1888 saw the debut of Murray and Murphy, "famed Irish comedians" in their act called Our Irish Visitors. The Theater also served as a lecture hall and convention center, particularly for the Republican Party. On Dec. 15, 1893, the Tribune reported The Swift rally [n.b., Mayor Swift] in the Arcade Theater, Pullman was on the exact spot where John Patrick Hopkins made his first inning in business in the city. Reporting about an upcoming rally for Republican gubernatorial candidate "Private Joe" Fifer, the Tribune on Sep. 30, 1888 reported If the weather is favorable 'Private Joe' will speak in the public square, immediately south of the Hotel. In case of rainy weather the demonstration will take place in the Arcade theater.

Handbill for the play Dombey and Son, by Charles Dickens, undated.
The Pullman family also dabbled in theater production. The Tribune of Nov. 29, 1890 reported "The neat little Arcade Theater at Pullman was filled last evening with an audience which heartily enjoyed a musical and literary entertainment given for the benefit of the Pullman Public Library... The entertainment was planned and managed by Misses Florence and Harriett Pullman and Mrs. G. D. Smith, and netted about $300 for the Pullman Library." The Arcade theater was also used as a gathering place on October 20, 1897, as Pullman workers eulogized George Pullman after his death.